The Analysis of Setting in Kuroshitsuji

Background of the Study

Literature is a piece of history in the form of art which rises enchantment using language. It can be analyzed in its intrinsic and extrinsic elements. The prior elements cover the inside parts of the literay work such as themes, character, plot, setting, point of view etc. The latter deal with the outside parts of literay work, i.e., social, psychological, historical and philosophical factors related to literary work (Wellek and Warren, 1948:73).

This study is intended to analyze the intrinsic elements of a Japanese comic or known as manga. The manga which is used as the object in this study has been adapted to three anime series, three stage plays, one anime-movies and a live action film entitled Kuroshitsuji (2006) by Yana Toboso. Kuroshitsuji or in English -Black Butler tells story about a twelve years old -then thirteen, nobble-boy who made contract with a demon in order to get revenge of the death of his parents.

Aims of the Study

The data of this study were taken from a Japanese comic or known as manga entitled Kuroshitsuji written by Yana Toboso in 2006. This study used library research method supported by the note-taking technique. Collecting the data was done by reading the manga carefully in order to understand the story and identify the setting, and then highlighted the texts which were considered the setting. The data of this study were analyzed using the qualitative descriptive method. Analyzing the data were done by classifying the types of the data into the sequence of setting and the details of the sequence of setting based on the theory of setting by Kenney (1966) supported by the theory from Diyanni (2001).

The Analysis of Setting in Kuroshitsuji

Ciel Phantomhive and his butler Sebastian Michaelis broke through the file room and collected files of the lost children without permission. The page showing the event of the story occurring in a file room can be seen on page 1 chapter 24. The file room is located in the third floor of Scotland Yard’s office. In front of the

door of the file room, there is a ‘File Room’ sign and next to the door there is another sign written as ‘No Entry, Permission’. There are a lot of books in the file room. Two boxes can also be seen piled-upnear the book shelf where Ciel is standing next to Aberline. The file room in Noah Ark Circus Ark is considered the Neutral Setting. According to Kenney the Neutral setting is little more than reflection of the truth that things have to be happening somewhere. It is a setting in which the environment of the story tells about a certain place, which in this case is the file room.

The page that shows that Ciel is visiting Undertaker is page 7 from chapter 24. It is shown that Ciel’s horse carrige arrived in front of Undertaker’s shop. In front of his shop, there is a sign written as ‘Undertaker’ under a skull looking down to it. There is only one front door in his shop, and on the left and right sides of the

front door, there are grave-yard stuffs such as woods, coffins dan tombstone.

Undertaker is famous for his custom-made coffin, so inside of his shop there are some multi-function coffins. According to the type of settings by Kenney, Undertaker’s shop is considered the Neutral setting, because the story happened in a certain place which is the shop.

The Show of Noah Ark Circus

The third place that Ciel and Sebastian visited in the Noah Ark Circus arc was the Circus. Their arrival in the Circus can be seen from page 16 chapter 24, where Ciel and his butler were standing below the welcome sign of Noah’s Ark Circus. The inside part of the Circus tent was shown very glamour with three hanging lamps in the ceiling. The seating position of the audiences leads directly to the stage. When every stage of performers from the circus member is speaking, there will be a stage lighting so the audience will focused on the speaking person. The show of Noah Ark Circus is considered the Neutral setting, because the story is happening in a certain place and time which is the Noah Ark Circus’ show itself.

Page 27 chapters 25 is showing the situation in Ciel’s bedroom. In his bedroom there is a large bed with curtains. Some pictures are hanging on the wall and one big mirror is placed on the wall near the table. According to Kenney’s theory, the town house setting in this arc is considered a Neutral setting type, because the story is happening in a certain place and time. 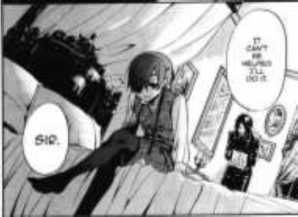 The Backstage Area of the Circus

This time Ciel and Sebastian are trying to be circus members, but there is an audition for Ciel if he wants to be a circus member. In page 33 chapter 25, Ciel is drawn standing on a small podium preparing for his tight rope. The tight rope walking takes place inside the tent where the circus member used to do their shows. Some of the sting puppets are not complete and some of them are also placed in a cage. On the wall, there are three frames which frame the sting puppets. One of the puppets in the frame is having the shape of a horse. A string puppet even hanging around the ceiling attached to the lamp. In this part of the story, the setting is considered the Neutral setting type because the story is happening in a certain place and time. The train station is drawn in page 6 chapter 36. In the train station there are some people dressed as noble including Ciel. The train is drawn only the side part of it. Ciel as a noble man is taking the first class seat so he entered the train using the door with ‘first class’ sign. The Train Station is considered a Neutral setting type because it is a certain place where the story is happening. Ciel is going to the workhouse to introduce himself as a new donatur after killing the former donatur for the Workhouse, Baron Kelvin. The Workhouse is considered a Neutral setting based on Kenney’s theory because the event of the story is happening in a certain place and time. This research entitles “Kami and youkai in Kamisama Hajimemashita by Suzuki Julietta”. The reason for this title was… Figurative language can appear in various types and the meaning may not be determined by its components. This…